The school was founded on 7th july 2009 (full moon day of AASHADH), the pious day of Gurupurnima by Shree Adya Katyayani Shaktipath Mandir Trust, Chhattarpur, New Delhi, established by Sant Baba Nagpal.Sant Baba Nagpal, who was born in karnataka, lost his parents at a tender age. An unkownd lady took him to the Temple of Mother who would always remain with him. Ever since he was in the shelter of the Divine Mother and became her true devotee in thoughts, words and deed.

The Baba was taught and trained by several Saint/Sadhus during his visits to various places of pilgrimage. Motivated and guided by the devotion of mother Goddess Durga, Sant Baba Nagpal moved to Delhi and later shifted to the present site at Chhattarpur, where he founded the Shree Adya Katyayani Shaktipeeth which took the shape of a minitemple town spread in 70 acres of land. 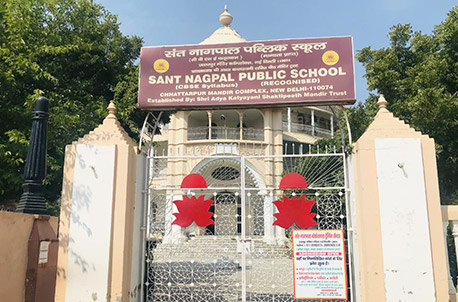 Where he founded the Shree Adya Katyayani Shaktipeeth which took the shape of a minitemple town spread in 70 acres of land. The temple complex is an example of the miraculous deeds and hard toil of the Baba by the grace of Goddess Durga. The buildings of the Shaktipeeth reflect different architectural styles of various regions of the country.

The Baba’s mission was to remove the veil of superstition and ignorance from the minds of the common people and to spread the message of knowlegde, tolerance, brotherhood and patriotism. The Baba kept himself abreast with the march of times and was always in time with YUGDARAM, giving importance to human dignity, spirit of equality, scientific outlook, value of proper education and advances in various fields of knowledge and how to take them to the poor, down trodden and needy. Narrow considerations of caste, colour, creed, region, social and economic status etc. had no place in his mission.

Baba’s Shaktipeeth is the foudation of purity, selflessness and a healthy blend of the eternal truth in ancient traditions in the modern world. The Shaktipeeth is the second largest important prosperous place of worship in North India after GOLDEN TEMPLE of Amritsar. It also forms a part of itinerary of visitors from various states and even tourists from abroad.

Owing to the rapid growth of information technology in every sphere of life, Baba had a great desire to establish a public school which can provide our youth for higher education in technical management and administrative fields. By establishing a public school, he also desired to inspire the future generation with spiritual values and feelings of service to humanity.

Keeping in view his desire, the Board of Trustees of Shree Adya Katyayani Skaktipeeth Mandir Trust resolved on 27-12-2008 to start a public school in Gole Building (Markandeya Complex) Chhattarpur Mandir, with future expansion taking place in a part of the open area adjoining the Gole Building. The school was inaugurated on Gurupurnima in 2009 by Sh. A.L Batra, the Chairman of the Trust.

Presently th school is being run from Nursery to VIII classes. The school will be a Senior Secondary School up to XII class in all the three streams i.e. Science, commerce and Arts.

Sant Nagpal Public School is affiliated with CBSE up to Secondary level.

Applications are invited for admission in class KG to class IX.